Thriftscore this afternoon bringing home 5 plates from the dinnerware line produced by Sterling China Company in 1949 and continued through the 1950’s. Designed by Russel Wright and available in five sizes; this line was mostly used by restaurants and hotels and is quite hard to find - these are the first I've seen, kicking off spring with some fanciful floral for our casual counter meals. ..

Posted by Robert at 1:12 PM No comments:

Paul McCobb for the Planner Group

The furniture of the people ... Up early on a very rainy Saturday, I saw an estate sale sign on the road after picking up my morning coffee and with bleary eyes entered the 1920's bungalow stepping back in time to somebody's eclectic mix of mid century oriental and early 20th century heavy wood furnishings. Walking through the house there wasn't much of interest for me, but seeing the things they left behind and accoutrements of their lives told the story many years in the making. It was the simple, splayed leg coffee table propped conspicuously on top of the old brown wood kitchen table that caught my eye.

This piece has 3 cleats for the legs which is a bit unusual. Pictures of other similar McCobb tables have 2 cleats either crossed or in line.

Back in the day, you couldn't go wrong buying a 1950's Paul McCobb coffee table for your ranch house and for many, the Planner Group designs define mid-century furniture. Paul McCobb furniture is everywhere as he made a LOT of it and it was cheap - at the time :) Love it or Hate it, there is little in between when it comes to the man and his designs. It was the SHAPE not the materials that differentiated his works.

Oh! I waited until half off Sunday and a break in the rain before throwing it in the back of the blue truck for the ride up to Highland House


Last week as I walked through the furniture room at the Goodwill something under a varied array of faux decorator items caught my eye, in fact, what I saw made me stop in my tracks. I had never seen anything like it. It was a dresser and though feet spoke to a Mid-Century heritage, the drawers were offset and made the piece stand out from all the other 'brown wood' surrounding it on the floor. I pulled open the top drawer and immediately saw the familiar Conant Ball brand and thought 'Oh , My'.
I do not like googling in the store (gauche), but I did a quick search to find out a little something about what was sitting in front of me. I quickly found a few samples after an images search and saw I had found a Conant Ball ModernMate set from the 1950's - I could not pass it by.

The 9 drawer maple dresser and matching Nightstand were unique and aesthetically gorgeous. 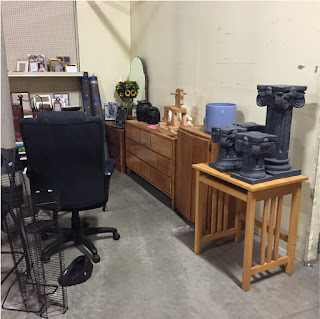 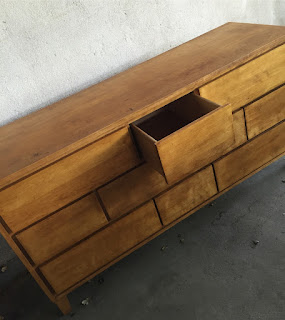 After looking at the two pieces for a couple of days out in the garage, researching what I had found turned up some very interesting information. Touted on 1st dibs, Chairish and the like as "Russel Wright" designed with its 9 staggered drawers, the lowly redit had many threads supporting evidence provided by the granddaughter(?) of designer Leslie Diamond that indeed this piece was made in the 1950's and was part of Conant Ball's ModernMates line of furniture, that Mr. Wright had designed in the 30's and 40's for CB but not in the 50's as he had moved on to other engagements. I felt so cool knowing something the big boys had missed, what a weekend .... 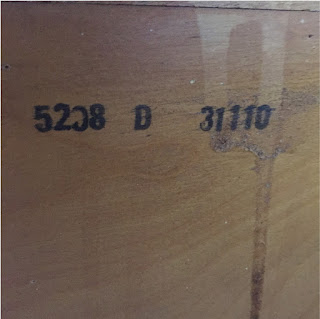 Posted by Robert at 2:47 PM No comments:

Mom joined me at the local auction this weekend giving me her input on most everything that passed the bench - tons of fun hearing her talk about actually using some of the antiques we saw in daily life like Iceboxes with block ice in the bottom (cold air raises right?) and Japanese glass and stainless everything after the war.

I had been reading recently about Antique American ‘Brown Furniture’ and validating the article’s point, most of the day was spent watching as piece after piece of beautiful walnut, mahogany and whatever was passed or sold at unbelievable prices. The auctioneer was at times almost pleading with people to take the big armoire and china cabinets off the floor with tables and dressers finding a little traction. Very interesting to watch.

We had spied a couple of interesting pieces during the preview and after the dust had settled came home with some chairs that put me in Auction Heaven, notably 4 Kai Kristiansen No. 42 dining/side chairs.
These iconic mid-century modern designed chairs are all teak, with the original wool upholstery in a soft rose color and a swivel back for comfort. Designed in 1956/57 there is no dispute the striking profile of these chairs fully capture Danish Modern Design.


I must say that dragging Mom along brings pretty good luck - I wonder if she is available next month !!

Posted by Robert at 9:56 AM No comments:

Bringing a little mid-century modern style and grace to my kids bathroom, I found this Federal Glass Contemporary pattern better known as amoeba, boomerang on drinking glasses, chip & dips and storage jars but was dismayed to find they were usually the key element of some street facing window for the chic Mid-Century shops in the county. This usually meant expensive.


But last night I found this lone apothecary jar sitting on the shelf of the the local school thrift and knew immediately it was going home with me. The thrift has been inching up prices over the last few months so I have not been finding much out of that shop but this one came for a cool $3.99 and though not a 'steal' by any stretch was still most agreeable.

This pattern, popularly called, amoeba or boomerang, was actually called Contemporary #4695. Marketed by the Federal Glass Company in the 50's and 60's it was distinctive for a couple of reasons:
The white and pink are most difficult to find but this turquoise will match the washroom's still original 1962 color scheme perfectly

"... to unify the furnishings of a room, lamps should bring a thread of continuity to the look and feel of your space." ... So opens one description of how #mcm designers approached lighting and when I saw the gold and white geometric patterns on this#midcenturylamp I thought it would easily serve as the 'glue' that visually holds together our #midcenturydesign console and the #georgenelsonclock.

The auction was lightly attended and for what I would pay at the local thrift ($5) the tall, ceramic bowling pin found a new home after the obligatory cleaning and re-wiring.

Hand painted with media style texture in the large diamonds, the small diamonds are cutout holes giving the surface depth.

Posted by Robert at 8:43 PM No comments:

The Colors of Fire-King and Pyrex


What would the mid century be without a little colored tempered soda-lime glass? Can you imagine thrift stores with NO pyrex or fireking glassware? I avoided this stuff for years but over the weekend I had to do the unthinkable and at an auction bought a lot of the ubiquitous colored kitchen 'must haves'.

It was the end of a long day and maybe 5 people were left on the floor, all the big draw items had sold and as the auctioneer got into the mode of asking "$60, 50, 40, 20 first 10 takes it all" for each of the remaining shelves of grungy stuff, I raised my hand printed card with the number 84 scrawled in blue sharpie and broke my standing commitment, taking home an old Uhaul box of the colored glass.

After washing and picking all the baked on grease, grease, and more grease from the ageless collection I think I may have found some cool cookware for potato salad and cole slaw... I'll use it and see what all the fuss is about :)

There is soooo much information on the web about these dishwares, I will not be able to say anything new - except that I have finally joined the crowd and have some Pyrex and Fire-King in the cupboard.

Pyrex Love
The set I procured is a rather eclectic mix 40's, 50's and 60's wares including the '400 Multicolored Mixing Bowls' set in primary colors. All were in pretty good shape with colors still bright and only a few scratches.

The squat round bowl is labeled 024 and is a wonderful shade of Turquoise. Though it was in the worst shape when I brought them home, it actually cleaned up very nicely. First introduced in 1956 this is my favorite color so far.

The 2 square red pieces are Refrigerator sets, billed as “oven-refrigerator sets”. In 1949, a refrigerator set was issued in three of the colors of the first 400 bowls. The yellow was the 1.5-quart size, blue was 1.5 pints, and red was 1.5 cups. I had 2 of the red (without lids) in the lot I purchased.

The Blue Dots bowl comes from the "New Dots' set that was introduced in 1967. I had never seen these until it was included in this auction lot but they are quite familiar to those in the know.

Fire-King
The Anchor Hocking Glass Corporation was formed in 1937 as result of a merger and is best known for its Fire-King glass which was manufactured from about 1940 until 1976. Fire-King was a brand rather than a pattern, and although it is usually associated with ovenware and refrigerator containers, it was also used on a wide variety of patterns and colors of dinnerware, mixing bowls, and coffee mugs.
For many collectors of this dishware older seems to be better and since Anchor-Hocking has been producing glassware for so long dating can be a challenge. Many resources exist on the web and of course just take a browse at E-Bay and you will find samples from the oldest to the newest.

I actually ended up with 4 different types of mugs in the little sample I bought.

Posted by Robert at 8:42 PM No comments: