Wanted a lamp for the piano when I found this #mcm beauty on the shelf at the local thrift ... Half off at $3.50, the vintage mid-century "Style House #56" desk lamp features adjustable flexible joints for different positions. The black base, gold stem and hood will look great against the ebony finish of the piano. The hood and stem are made of plastic and the base is made of metal. 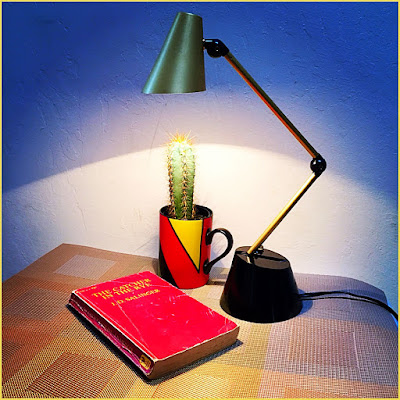 This week I sold the old Italianate Couch that was sitting in the family room and went to pick up a couple of Thonet Lounge chairs I found on craigslist. Pulling up to the house south of San Francisco I immediately was greeted by a team of pickers who for the next 2 hours shared with me stories of their adventures around the Bay Area hunting mid century furniture. During this time they shared with me the many object de'art they had procured and were looking to offload and nothing really caught my eye until I asked about a surfboard table - yep, a Basset was in the garage and I could have it with a matching side table. I did not know anything about the Bassett company but the tables were in reasonable shape and affirmed their Danish influence with delicate legs and inspired rolled edges. We quickly worked out the details which included a future Pinot Flight wine tasting up at the house.

We loaded the 2 lounge chairs and the tables into the bed of Old Blue and as soon as I got home I looked up The Bassett Furniture Company and found they sold a wide range of furniture throughout the last century and the tables I had bought were from the Artisan Group, their take on the danish craze that was popular at the time. Designed by Leo Jiranek, a furniture and interior designer born in Grand Rapids, Mich.in 1900, and graduated from Princeton University. Jiranek had designed lines for the better part of the 20th century for most of the popular US furniture manufacturers at one time or another. Considered by some to be the "Dean of Furniture Designers," he was one of the Industry's first, and completely committed freelancers, who enjoyed a 67 year career working for such companies as Thomasville, Ethan Allen, Kroehler, Heywood-Wakefield Company, The Lane Co., Bassett, Broyhill and Garrison.

It was from ad's published in the early 1960's we find that the Artisan Group was finished with Oil Stained Walnut and Dupont Dulux Satin Sheen Varnish.


We are asked to consider the lines "oil walnut finish and unique rolled edges of solid wood" and then look at the price of $19.95 - $69.95". Unlike the similar Conant Ball table these rolled edges taper flat near the ends .. nice!

I'm particularly taken with the cat enjoying itself under the side table in the ad! The Artisan side table I found is exactly as is shown in the pictures, however, the coffee table is different. It has similar part numbers and the same Bassett Furniture Industries brand on the bottom even the same upturned 'rolled' edges but the table is longer, shorter and does not have the magazine rack under the table top. I have seen others like this at Etsy and 1stDibs and all attribute to the Bassett Artisan Group but I have not found any Ad's or references to the version without the magazine rack in Bassett literature.

Took a few months, but I finally found a cover at#algomanetcompany for my vintage #midcentury 2-wire butterfly chairs ($25 for frame & $22 for oversized cover).

I placed them beneath silver prints of the kids from #artrogersphotography with a #midcenturydesign chrome plant stand and #midcentury pottery planter I picked up at auction ($10).

The eyeball lamp is from my #SanFrancisco days on Haight Street and after rewiring and replacing the bulb fixtures works great. #zgallerie provides the faux fur throw with super fine and comfy fleece backing ... 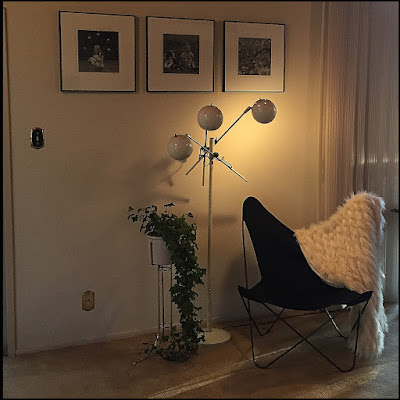 Designed in 1938 by Jorge Ferrari-Hardoy, also known as the BKF and the Hardoy chair, this design was first mass-produced in the US by Alvar Aalto's company Artek (the name a contraction of "art" and "technology"), Knoll bought the US rights to the chair in 1947, but stopped production in 1951 because they could not sue other manufacturers for making unauthorized reproductions of the Butterfly chair.

Posted by Robert at 9:57 AM No comments:

This weeks #thriftscorethursday has gotta include the sleek, elegant Nambe candy/fruit bowl pulled from the "steel" bin at the goodwill in Marin County. She was looking pretty sad when I found her but with a bit of polish and lots of hope she soon joined the Nambe candlestick and my favorite #katespade coffee cup. 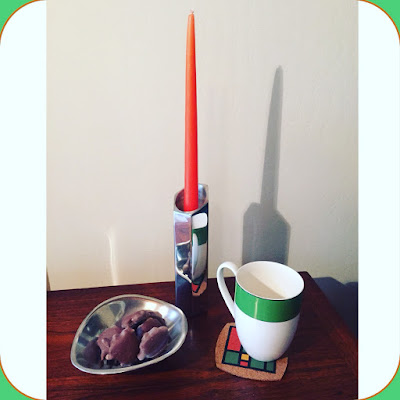 Designed by Richard K. Thomas in 1951 the graceful swoop of the bowl embodies the #midcentury ethic with a fluid, asymmetrical flow. Both the bowl and the Nambe candlestick came home for $4.98 - thrift score !