Gio Ponti Made Some Chairs

Walking through the back room of the Goodwill last weekend I spied the rope weave, delicate ball feet and stretched ladder back and passed thinking it was a #mcm knockoff, it was so light and the weave so perfect.I sat in the chair, it was solid.

Back at home, while googling the usual keywords I found Gio Ponti, an Italian who designed mid century chairs meant to revolutionize the way the world viewed factory-produced furniture. He sought to reclaim the stylishness and artistic appeal of crafted furniture, while combining it with the ease of factory production. Interesting story, but since I had walked out without the chair I was pretty sure it would be snatched up pretty quick.

However, I could not stop thinking about the fluid flow of the chairs design and returned on Wednesday morning to find the chair still in the back room and turning it over and looking at the front support saw the 'Made in Italy Mod.31' stamp I had seen on similar Ponti chairs on the web - $4.98 and it was in the back of Ole Blue ready to come home !!!

For the price of a replacement stylus we finally have an appropriate device to play those antique music disk things!!! We have been looking around for the last year, waiting for 'our' console to come and last weekend at a neighbors garage sale this 1968 silvertone was offered to us if we would get it out of the driveway !!!. Yeah, sure ya'betcha !

Home - the electronics cleaned and tested, we found the tuner and amplifier worked great and the disk player needed a $4 stylus we ordered promptly... Very cool tunes now fill the music room and NO (in answer to my youngest sons query) it does not only play old radio stations !

We have taken to eating casual meals on the stools at the kitchen counter and for those meals decided to lightened up the mood with #midcentury shakers that are fun!!!! My daughter Grace spied these at the local thrift ($.99 ea) and from somebodies relinquished collection she chose the #kissingsquirrels and the classic #mcm totems. Both sets have cork plugs and were made in Japan after the war continuing the S & P shaker tradition started by John Mason in 1858 that required another 50 yrs before becoming popular when the Morton salt company figured out a way to keep salt from clumping in the shaker.

Eric Hoglund Was Quite a Mystery ....

Erik Hoglund studied art and design in Sweden in the early 50's and through the next 3 decades is said to have revolutionized the art of Swedish glass.

When I first picked up the well taped bundle of iron at the Goodwill I thought maybe this was one of those metal puzzles and tried to connect the hanging chain to the glass holders in some rational way ... NO! When I spotted the 'Sweden' imprint I heard the little voice say 'Buy It' thinking this must be #midcentury and not just old iron chains.

For $4.98 I was on a google adventure that took a week to determine I had found an early #ErikHoglund iron candelabra ... Still keeping my eyes open for the original glass, for the time being it will hang in the alcove by the fireplace.

Bookshelf 'stuffs' include the classic #MidCentury offerings of one Theodor Suess Geisel or as we all came to know him, Dr. Suess! What was YOUR favorite?? I was partial to Go Dog Go ... 'It's a dog party...'

Wood and chrome bar caddy easily compliments the cross legged #campaigntable sitting in the corner. Out of the #goodwill for a cool $2.48 and married with #midcentury hand painted gold trim glassware ($.99 ea), a set of abalone shell coasters ($.99) and a hammered stainless ice bucket completes the necessary accoutrements of a #midcenturymodern setup ... Cocktails anyone?

Found the perfect place to sit the #GeorgesBriard dish!! At an estate sale in #sanfrancisco over the weekend, amongst sooooo much turn of the century (19th!) heavy wood objects, down in the basement, was this delicate little #midcenturymodern walnut and glass top table!


Amongst a few other treasures, I took it home and it was quick work to refinish the wood and clean the glass ... I think it will work well in the sitting room and the Russel Wright Asterisk Glasses look great sitting on the Zebra skin coasters !!! 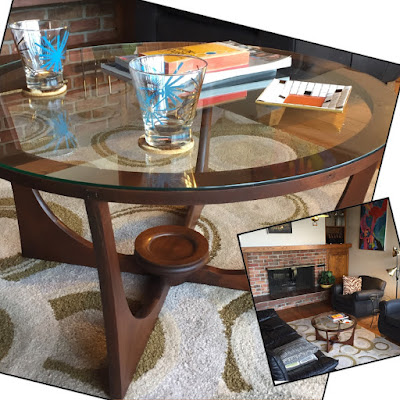 As I was reading a little about Georges Briard I learned this was NOT an actual person but a signature Jakob Brojdo (the artist) used to mark commercial glassware he designed which were 'wildly popular and numerous'. So popular were his designs that Jessica from the blog,There’s No Accounting for Good Taste, states: “Briard designs were so numerous and were produced for so many years that it’s difficult to get through an entire flea market without seeing something he designed, which makes them great entry-level collectibles.”

A Little Deco for Effect ...

Most unusual #mcm, #deco influenced candle holders I have ever seen... Made of heavy forged aluminum(???) they cleaned up nicely and I added a couple of blue glass votive holders ... $2.49 the pair down at the Marin goodwill.

The #midcenturydesign tortoise shell coasters were $.99 for 6 and OCTOGONAL! 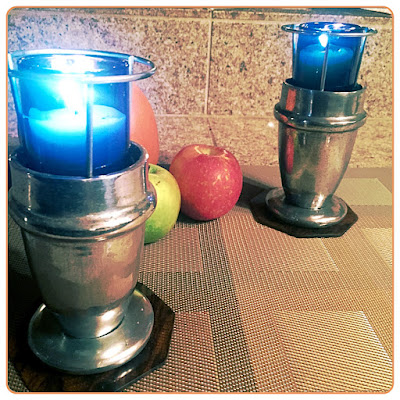